By the end of this cautionary tale, you might want to run out and, like Tom Hegna, buy a dozen annuities. (In photo: The film's fictional couple, under financial stress.) 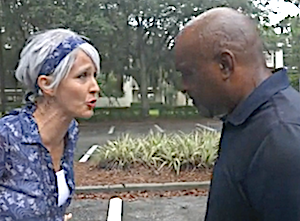 A fictional Florida couple’s agony throbs at the heart of “The Baby Boomer Dilemma: An Expose of America’s Retirement Experiment,” a new film about America’s retirement financing woes. The movie ends with the wife weeping tears of regret and recrimination because her husband failed to opt for a pension or buy an annuity.

Yes, an annuity. In Doug Orchard’s Ken Burns-ish documentary, an A-list of US retirement experts take turns telling the back-story of retirement financing in the US since World War II before finally converging on a fairly strong endorsement of income annuities.

By the end of this 85-minute cautionary tale, some viewers might want to run out and, like Tom Hegna, buy a dozen annuities. It’s no wonder that financial advisers are renting this film and showing it to groups of middle-aged prospects. (The film can be downloaded for $29.99.)

A roster of experts

Orchard visited the subject of retirement in an 2018 film on the national debt (“The Power of Zero”). Here he taps into a network of professors, annuity industry people, former regulators and others who understand (and in some cases helped create) the products and the policies that have shaped retirement financing in the US.

Readers of RIJ over the past decade may recognize some of the commenters. Respected academics Moshe Milevsky, Olivia Mitchell, Brigitte Madrian appear here, along with the late David Babbel of Wharton. Two Nobel economist/entrepreneurs, Robert Merton and William Sharpe, offer their views.

Former officials, whistleblowers and authors also adorn the cast. There’s a former Comptroller General of the US, an attorney who blew the whistle on bankers who fleeced a pension plan, a former president of the National Association of Insurance Commissioners, and congressman Michael Gallagher (R-WI). We even meet Tex Benna, the reputed “father of the 401(k).” Ambling about his grassy horse farm near Philadelphia, Benna explains his discovery of a subsection of the Internal Revenue Code–(401(k)–that would permit the tax-deferred, private-sector defined contribution savings plans that tens of millions of American workers participate in today.

As the movie warms towards annuities, people who frankly love annuities take center stage. We meet celebrity retirement speaker and author Tom Hegna on an Arizona golf course (and in his kitchen with his spouse, Laura). In a office in Des Moines, amid foot-high stacks of reports-to-be-read and items-to-be-filed, we find Sheryl Moore, founder of annuity consulting firm Wink, Inc., whose life goal is to  “rebrand annuities” in a positive way. I know several of these experts; I could tell that the filmmaker knows how to draw people out.

How we got here

Alternately back and forth between interviews with these well-known retirement mavens, Orchard tries to simplify and condense the tumultuous history of defined benefit pensions, 401(k)s, and Social Security. People with no prior knowledge of this history—the prequel to our world today—may strain to catch some of the references.

We hear about the rise and fall of corporate pensions. Olivia Mitchell covers the history of the modern private pension from the wage controls of World War II to the failure of Studebaker’s plan in 1963, to the passage of the Employee Retirement Income Security Act of 1974, to the underfunded public pensions of today. The 401(k) defined contribution plan has of course succeeded the pension as the primary employer-sponsored tax-favored retirement savings vehicle. These plans have helped Americans save trillions of dollars for retirement, Benna tells us, but at the cost of exposing innocents to the risks of the stock market. If there’s a heavy in this film, it’s the 401(k).

The film doesn’t dispel a viewer’s doubts about the state of Social Security. We learn about the program’s financing crisis in 1980s, George W. Bush’s push in the early 2000s to partially “privatize” the program, and the shortfall in funding that it might face in 2034. (Critics harp on the idea that Social Security’s future liabilities are “unfunded.” But our government has “print on demand” money. It doesn’t need to pre-fund future expenses, nor should it.)

The film also makes passing references to esoteric phenomena like “sequence-of-returns risk” and “mortality credits.” Each of these hard-to-unpack topics might sustain its own movie, and maybe its own six-part Ken Burns epic. Orchard keeps up a swift pace—maybe too swift for the average viewer.

In the final section of the film, the conversation shifts subtly from big picture public policy matters to individual annuities. “Annuities” are positioned as a solution to the dilemma posed by the disappearance of defined benefit plans and the lack of provisions in most 401(k) plans for converting savings to retirement income.

Here you will meet people who rave about annuities. Hegna, pausing between putts, explains that he owns 11 different annuities. Babbel says that he owns 14 annuities, half of them still growing tax-deferred and half of them switched on and delivering monthly income. We learn that Moore wants her tombstone to reflect her lifelong quest to redeem the reputation of annuities and save America’s elderly from poverty. Economists, Milevsky tells us, tend to disagree on every possible matter except one. They all believe that annuities are a good idea for retirees. He urges 65-year-olds to put 20% to 60% of their savings into a lifetime income annuity. Mitchell suggests carving out 10% of 401(k) the  savings at retirement to buy an annuity that starts paying out at age 80.

We don’t learn too many details about annuities as specific financial products. Orchard’s film doesn’t name the many kinds of annuities, or describe their different purposes. It doesn’t distinguish between the types of advisers and agents who sell them or between the types of life insurers that issue them. That’s a wise choice of the filmmaker, because the details are devilish—and eye-glazing.

“The Baby Boomer Dilemma” collapses some 75 years of retirement policy history into less than an hour and a half of cinema. And it all collapses on the head of one unfortunate 62-year-old driver’s exam official in Florida, who appears to have lost half his family’s savings in a stock market crash.

The movie’s finale reminded me of the ending of the Pulitzer Prize-winning 1949 drama, The Death of a Salesman. Willy Loman, only 63, has just killed himself. His widow, Linda, sobs: “I made the last payment on the house today. Today, dear. And there’ll be nobody home. We’re free and clear. We’re free. We’re free.”

The Lomans lost hope prematurely, and I wanted to reassure the desperate housewife of this film: “It’s not so bad. Your husband can work five more years and get a bigger Social Security benefit. Your stocks will bounce back by then. Roll with it.” As the film’s title points out, Baby Boomers don’t face a retirement tragedy. They just face a dilemma.